Thursday, October 29, 2015
VALLEJO, Calif. (KGO) — ABC7 News was there for an emotional reunion between a San Francisco cop and a deputy sheriff and the young woman they saved from a burning car near Tracy. After almost a month’s stay at various hospitals, Briana Vargas will finally be able to go home soon. It’s a story you’ll see only on ABC7 News.

It was a tender moment Thursday as the two reunited with Briana.

Divine guidance is what Vargas and her mother, Linda Vargas, call it.

Briana added, “Yeah, I always tell her you guys are my little angels and that I’m glad to have another chance in life.”

The 18-year-old has been hospitalized since the horrific accident three weeks ago on Oct. 8. It happened at night where Highway 580 and Highway 205 meet near Tracy. Her car rolled down an embankment after colliding with a Jeep. She was ejected as her vehicle became engulfed in flames.

“I saw fire and I just tried to get up but my legs wouldn’t help,” said Briana.

San Francisco Sr. Deputy Sheriff Mike Clauzel was driving home from work when he saw the accident. He quickly rushed over to her.

“She was about 15 to 20 feet in front of the vehicle and the flames were advancing rapidly,” he said. “So she was lying face up. Her face was covered in blood.” 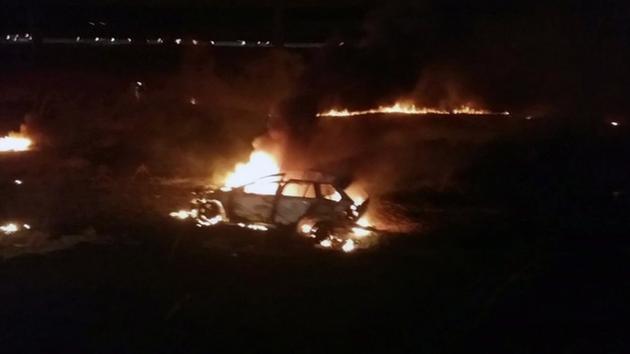 This image from October 8, 2015 shows a car fire near Tracy, Calif. A San Francisco cop and a deputy sheriff rescued 18-year-old Briana Vargas from that vehicle engulfed in flames. (KGO-TV)

Padmore, who by coincidence is friends with Clauzel, happened to drive by at the same time. He too stopped and helped.

“Control the scene,” he said. “Make sure everyone is stabilized, make sure they’re out of harm’s way.”

The two, with help from other drivers, were able to pull Briana to the road where a helicopter would soon take her to a hospital. She had internal injuries and fractures.

“We just went into action and did things we normally do,” Padmore said.

But Briana has another name for them.

“They’re heroes, my angels,” she said.