On July 21st, 2014 San Francisco Deputy Sheriffs conducted a 6 month station transport trail picking up prisoners from the police stations and transporting them to the San Francisco Sheriffs Department for criminal booking.  This is how it worked, when one of the officers at the Tenderloin Police Station makes an arrest, one of San Francisco’s most active police stations is down an officer. That’s because it can take up to two hours for the officer to drive a prisoner to the Hall of Justice and process them.

On Saturday that changed — at least for a time.

“A lot of times, officers will be stuck in line behind officers from other stations,” said Sgt. Shaughn Ryan, who works out of the Tenderloin station. “I have had officers down there for four hours.”

If it’s a success, it will expand to all 10 stations.

The San Francisco Sheriff’s Department has done this work in the past, but it was discontinued most recently in 2006 because no money was provided to pay for the service.

San Francisco Sheriff Ross Mirkarimi reached out to the Police Department in 2012, requesting a renewal of the service, but talks finalizing the pilot did not start in earnest until earlier this year.

The departments plan to meet weekly about the pilot, which will be assessed at its completion for cost, man-hours and operational success. 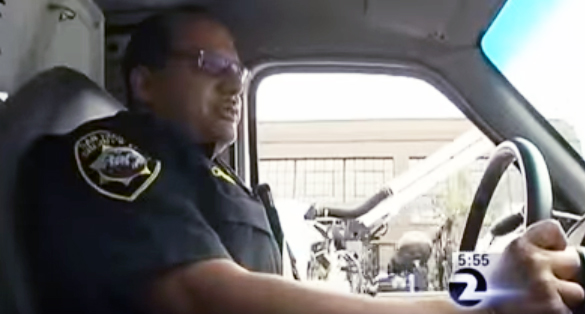 The plan is meant to relieve an understaffed police, but it will also give San Francisco deputies new duties. The drop in San Francisco’s jail population — one jail facility that had 60 deputies working it was closed in November because of that decline — has threatened to impact the number of San Francisco sheriff’s deputies needed for the jails.

The program will also help relieve officers from a specifically time-consuming prisoner duty: wounded prisoners. As it stands, sheriff’s Chief Deputy Kathy Gorwood said, prisoners who need medical treatment are not accepted at the jail, so they must be taken to San Francisco General Hospital.

Under the pilot agreement, most wounded prisoners will be dealt with by San Francisco deputies, who, to speed things up, will begin triage when the San Francisco Sheriff’s Department van arrives at a station house.

In all, the department expects to transport 15 to 20 prisoners a day from each station. If the program expands and uses the same number of deputies, it could mean transport duties for 25 San Francisco Sheriffs Deputies.

All of this is good news to cops on the street.

“It’ll free up officers who would have to be taken off the street to do the transfer that can sometimes take hours,” Ryan said.

The pilot may indeed make beat cops happy, but if there are no funds forthcoming from The City to pay for the permanent expansion of prisoner transfers to all 10 stations, the Sheriff’s Department will be forced to kill the short-lived pilot.

Where those funds will come from remains unknown.

“We’re not saying we want resources from the San Francisco Police Department,” Gorwood said. “We are saying we want the mayor to fund this if it’s a success.”

After the 6 Month Trial Project, it was noted that it was a cost saver for San Francisco yet the station transfer unit was not provided funding to continue.