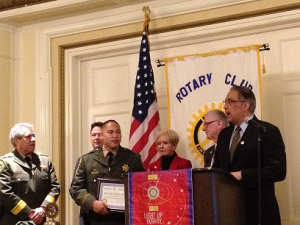 On February 10, 2015, at the Sir Francis Drake Hotel, the Rotary Club hosted its annual luncheon to honor the outstanding services of nominated personnel from the San Francisco Sheriff’s, Police and Fire Department’s, and the U.S. Coast Guard. Sheriff Mirkarimi nominated San Francisco Deputy Sheriff B. Mercado for his act of extraordinary service in rendering prompt and crucial aide to two children, ages four and one, left unattended in a parked car with all of the windows rolled up.

On his day off, while walking through the parking lot at a Wal-Mart store in San Jose, San Francisco Deputy Sheriff Mercado noticed the children sitting in their car seats by themselves. Although it was eight o’clock at night, the actual temperature was 76 degrees, which translated to a potentially critical situation for the children with the intensifying heat trapped inside of the car. 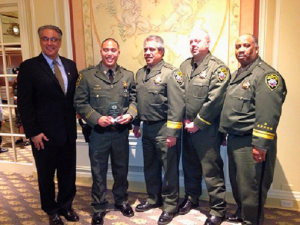 San Francisco Deputy Sheriff Mercado called the San Jose Police Department to respond to the scene, comforted the children while encouraging the older child to open the door. He searched the surrounding area for a parent or guardian, and asked a Wal-Mart employee to make an announcement via the store intercom.

After about one hour, the children’s mother returned to the vehicle and admitted to leaving her children inside the locked vehicle to prevent the older child from running around in the store. San Francisco Deputy Sheriff  Mercado placed the mother under arrest for child endangerment and turned the case over to the San Jose Police Department.