When San Francisco Deputy Sheriff Diego Perez, of the Sheriff’s Civil Unit Eviction Assistance, noticed that an elderly evictee he was counseling had stopped making eye contact with him.  This concerned Deputy Perez and the evictee’s body language raised a red flag to him.  The man had fought the eviction through the Rent Board and the courts.  He had won two stays of execution. But he had just learned that his third request for a stay was denied and he would have to leave the apartment that had been his home for more than 20 years.  Now that the eviction was inevitable, he wanted to know what would happen to his pets and his property if he could not move them out in time.

As Deputy Sheriff Perez sat with the man at a table in the Civil lobby and explained that a Deputy Sheriff would arrive at the apartment and ask all occupants to leave while the locks were changed, the man began to cry.  He said that his wife had recently passed away of cancer in their home as he held her in his arms.  He had watched as the Medical Examiner took her body away and now all he had left was the home they had shared.  Deputy Perez kept the man talking as he continued to observe his body language and listen to his concerns.  He told the man he was deeply concerned about him and asked him what he planned to do that evening.  The man said, “I am going to go home and kill myself.  I want to end this all.” 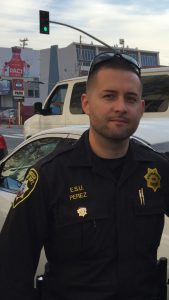 Deputy Perez kept talking to the man, encouraging him not to give up.  Deputy Perez, together with Sgt. Mike Kilgariff and Sr. Deputy Jin Choi, made arrangements for the man to be taken to Zuckerberg San Francisco General Hospital’s Psychiatric Emergency Services unit for a mental health evaluation.  Deputy Perez brought the man into the Civil Unit’S office and explained that his statements had caused him to be deeply concerned for his safety and he thought it would be helpful for him to speak with a mental health professional.  Deputy Perez rode with the man as he was transported, and stayed with him to explain the process.  As Deputy Perez turned to leave, the man shook his hand and said, “Thank you for saving my life today, because I would have gone home and done it.”

The eviction happened as scheduled, but thanks to San Francisco Deputy Sheriff Perez, the man’s family was able to get involved and find a new home for him and his pets.