In June of 2015, an attempted robbery was thwarted by a quick-acting San Francisco Sr. Deputy Sheriff V. Chew when he observed a subject fleeing and others giving chase several blocks from the scene of a robbery. 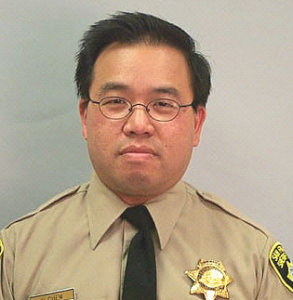 The primary function of the SFSD is to operate the system of county jails where there is an average population of 1,200 inmates, and a number of individuals on supervised release programs.

The SFSD also provides law enforcement and security services in the following locations in San Francisco:

The current sheriff is Vicki Hennessy, the first female sheriff in the city-county (and the second in the nine-county Bay Area, after Virginia Clark of nearby Santa Clara County, as well as the fifth female sheriff in California, joining Margaret Mims [Fresno County], Laurie Craig [Glenn County] and Sandra Hutchens [Orange County]).

The SFSD is a separate organization from the San Francisco Police Department. However, SFSD deputies and SFPD officers have all attended a POST-mandated police academy, and are duly sworn California peace officers enforcing state laws and San Francisco Municipal Ordinances.