Crime seems to be out of control in San Francisco. Yet in some cases the SF Crime Data states crime is decreasing. The question then becomes is that accurate, if not why isn’t it accurate.

We all have been watching and reading the news and on top of that we have been talking to the people in the communities. All we hear is how much crime there is. The main topics have been violence, illegal drug use and sales, thefts and car break ins.

“I had a discussion with my team on this topic and what we believe is happening is that the people of San Francisco are increasingly not reporting crime since San Francisco has become extremely lenient on criminals with little to no consequences. An increasing percentage of people in SF figure what’s the use of reporting it when nothing will be done,” said Ken Lomba San Francisco Deputy Sheriffs’ Association President.

We conducted a poll on our

Facebook Fanpage (please like our page) asking our visitors “When your car is broken into do you report it to the police?” We had 223 people participate in the poll. 119 people marked “Yes, I report it.” 104 people marked “No, waste of time.”

What this tells us is that all the reported data given to the public stating that there is a decrease in Car Break Ins is missing something and may not be very accurate since there is no data on victims increasing or decreasing in reporting crime. This is an omission to the data presented to the public.

“Paid for by the San Francisco Deputy Sheriffs’ Association PAC.  Not authorized by a candidate or committee controlled by a candidate.  Financial disclosures are available at sfethics.org.”

I’ve been Robbed of my public safety!

Do you feel like public safety is diminishing in San Francisco?  It seems like crime… Read More »

Crime is getting worse in San Francisco which is really hard to believe. This Northern… Read More »

Are S.F. residents and tourists helpless?  In 2019 there has been an exponentially… Read More » 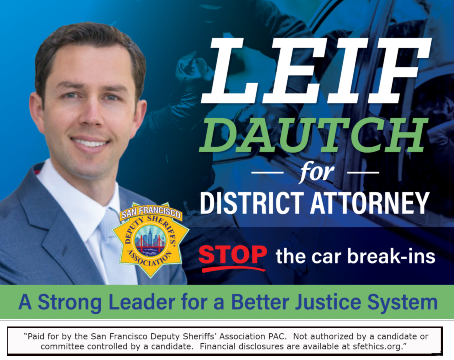