On February 2, 2016, while driving patrol for the San Francisco Sheriff’s Patrol Division, Sr. Deputy M. Clauzel and Deputy M. Li responded to a radio call that a CHP officer had been stabbed. 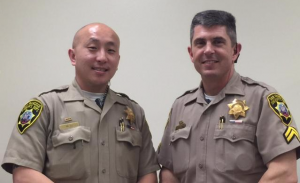 They first advised the SFSD’s Operation Center at Zuckerberg San Francisco General Hospital to clear a path for an ambulance for the wounded officer and then began to help search for the subject. They arrived at the subject’s location to find a police officer struggling to subdue him whereupon they assisted the officer in taking the subject to the ground. Sr. Deputy Clauzel and Deputy Li each gained control of the subject’s arms and placed handcuffs on him. SFPD and CHP officers then assumed custody of the suspect. A knife was discovered and secured at the scene.


“These two deputies exhibited initiative and good judgement,” said Sheriff Hennessy. “I am proud that they were able to provide valuable assistance and glad that no one was injured further.”