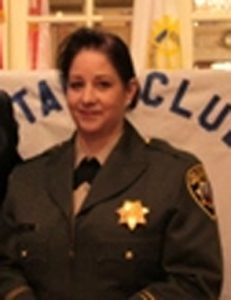 San Francisco Deputy Sheriff Gomez was honored for her heroic actions of March 27, 2012. Deputy Gomez was at a BART station platform waiting for the train to commute to work. She noted that the next train was due to arrive in one minute. At that time a young man ran across the platform and fell onto the train tracks below the platform. San Francisco Deputy Sheriff Gomez immediately climbed down onto the tracks to rescue the young man from the arriving train. Another person came to Deputy Gomez’s aid and together they began to lift the man up to return him to the platform. Two more people came to assist and were successful in lifting him back onto the platform. END_OF_DOCUMENT_TOKEN_TO_BE_REPLACED