On January 14, 2023 at 8:12 PM, the San Francisco Police Officers Association (SFPOA) released false information to the public, causing confusion and mistrust among the community. In a post on Twitter, the SFPOA attempted to dissuade the idea of Deputy Sheriffs filling police positions at the San Francisco International Airport (SFO), the Ports, and/or the Marine Unit by falsely stating that the San Francisco Sheriff’s Office (SFSO) is understaffed by 430 Deputy Sheriffs.  This is false, the Sheriffs Office is not understaffed by 430 Deputies. 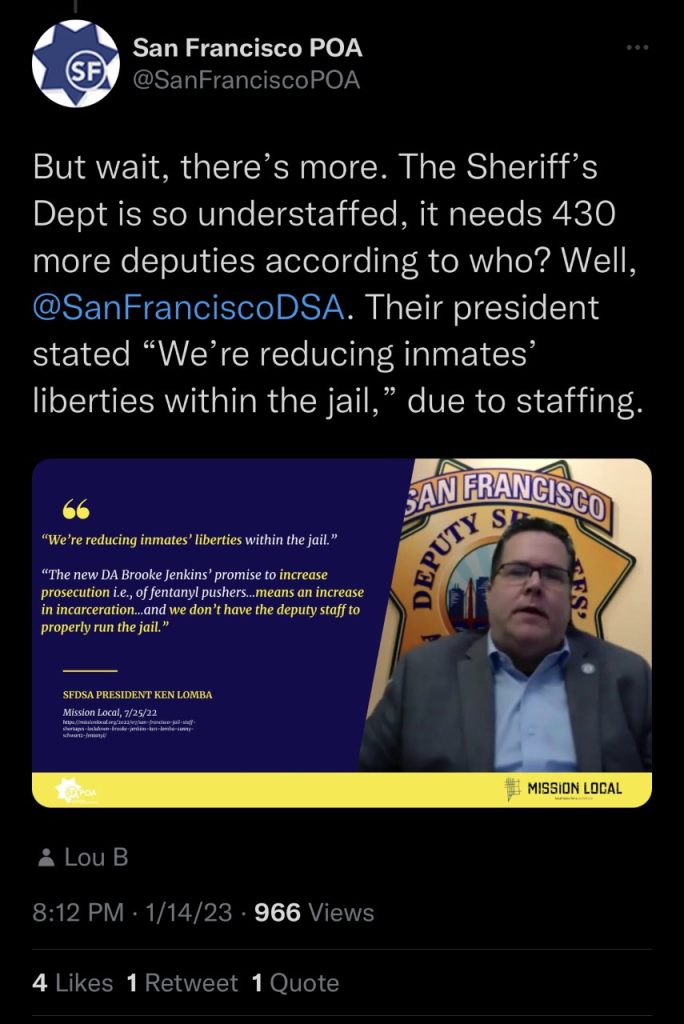 The San Francisco Police Department is currently understaffed to the point where it has to send its investigators to patrol several days a week, this is a serious matter as it impacts public safety and criminal investigations (reported by Lou Barberini GBTBNews). The understaffing problem is a critical issue that needs to be addressed immediately.

Normally, law enforcement agencies work together and help each other to achieve the goal of public safety. However, it appears that the SFPOA is more interested in protecting their monopoly on law enforcement instead of keeping San Francisco safe. Public Safety does not appear to be a priority for the SFPOA, if it was, why are they working so hard to block Deputy Sheriffs from providing staffing relief at the SFO, Ports, or Marine Unit?

Allowing Deputy Sheriffs to take over those locations would allow the SFPD to redirect its police officers to the City to respond to emergencies and calls for service, thereby increasing public safety. It is essential that the SFPOA and the SFDSA work together to achieve the common goal of keeping San Francisco safe. The public deserves nothing less. The SFPOA must understand that their actions have consequences and they must be held accountable for their words and actions. The community deserves transparency and honesty from its law enforcement agencies. The SFPOA should be focused on finding solutions to improve public safety, rather than spreading false information and attacking their colleagues in law enforcement.

It is worth noting that SFDSA President Lomba, the man being attacked by the SFPOA, had spent Christmas Day with his family delivering hot meals to Deputy Sheriffs that spent their Christmas Holiday working to protect others. This shows the dedication and commitment of the SFDSA in ensuring public safety and the contrast with the SFPOA’s behavior.