The San Francisco Police Officers Association (SFPOA) has recently raised concerns on Twitter about advanced officer training requirements for San Francisco Deputy Sheriffs to work at the city’s airport, SFO. However, upon closer examination, it is clear that the training in question is not as difficult or time-consuming as the SFPOA suggests. 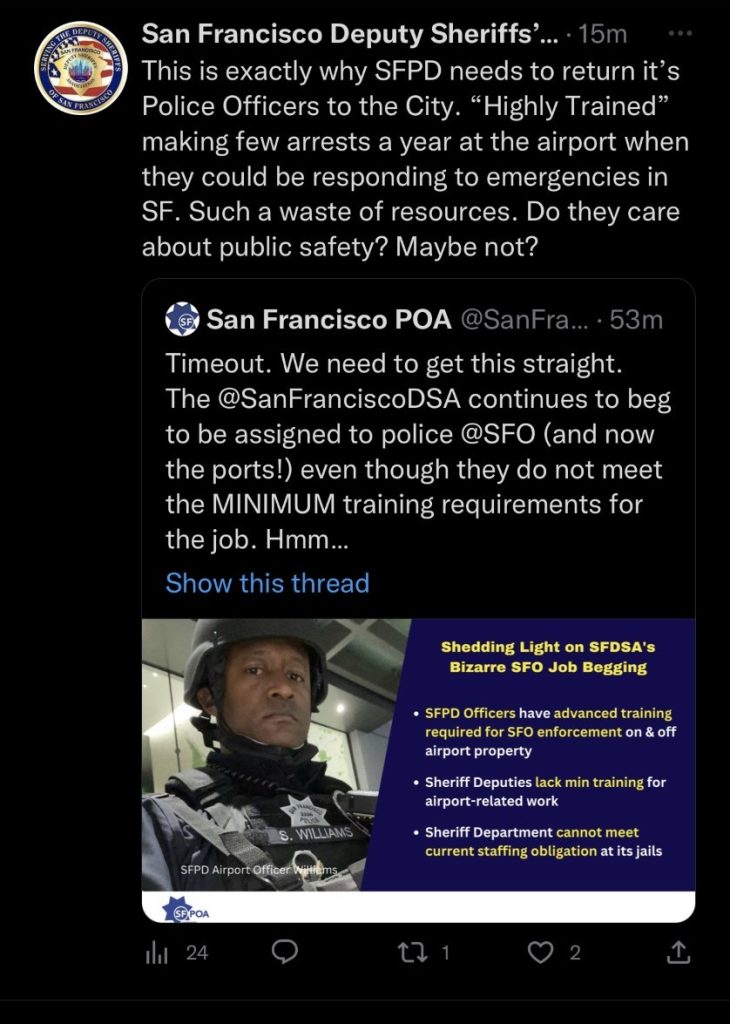 The “training” referred to by the San Francisco Police Officer Association is the California POST Aviation Security Training, a one-week, 40-hour course available to all law enforcement officers, not just the SFPD. The course covers the history of aviation security, introduction to the airport environment, criminal threat to the aviation industry, agencies and jurisdictions involved in airport security (such as the TSA, FBI, CBP, and USSS), legal aspects of aviation security, and the responsibilities of law enforcement officers working in an airport setting.

This training is not particularly difficult, and can easily be completed by San Francisco Deputy Sheriffs to meet the requirement to work at SFO. By allowing the SFPD to shift some of the police officers currently working at the airport back to the city, it will alleviate the staffing pressures on the SFPD and allow for a more efficient use of resources.

One solution is to grandfather in any SFPD officers close to retirement at the airport, and then work with the Sheriff to create a phased staffing plan that would allow for a percentage of police officers at the airport to return to SF to patrol in the City. This phased approach would ensure a smooth transition and allow for adequate staffing at the airport while also relieving pressure on the SFPD.

In conclusion, the minimum training requirements for San Francisco Deputy Sheriffs to work at SFO are not as difficult or time-consuming as the SFPOA suggests. By allowing the SFPD to shift some of its officers back to the city, it will alleviate staffing pressures and allow for a more efficient use of resources. The SFDSA will work with the Sheriff to create a functional staffing plan and assist with recruiting to ensure a smooth transition.

I am writing to express my concern about the current state of the San Francisco Police Department and to offer a potential solution to improve efficiency and increase police staffing.

As you are aware, the police department is facing mass retirements and is currently understaffed. This is a major issue, as it leaves our city vulnerable to increased crime and puts an undue burden on the remaining officers who are trying to do their best to serve and protect the community.

In order to address this issue, I believe it would be beneficial to reduce the size of the police department and turn over some functions, such as the SFO, to the San Francisco Sheriff. By reassessing the roles and responsibilities of the department, we can redirect resources towards increasing the number of police officers in San Francisco, particularly in high-need areas like the Tenderloin district.

I understand that such a change would require careful consideration and planning, but I believe it is a common sense solution that would ultimately improve public safety for San Franciscans. By streamlining the department and focusing on core functions, we can ensure that your SFPD officers are able to do their jobs more effectively and efficiently.

I also believe that turning over auxiliary functions, such as the SFO, marine unit, and port patrols, to the Sheriff’s Department makes sense. The Sheriff’s Department is equipped to handle these types of tasks, and it would free up additional resources for the SFPD to focus on crime reduction and public safety in the city.

Given the current state of public safety in San Francisco, we have concerns for the well-being of our union members who reside in the city.  I hope that you will seriously consider this proposal and take any necessary steps to make it a reality. As the leader of the SFPD, it is your responsibility to ensure that the department is functioning at its best and that our city is as safe as possible. I believe that implementing these changes would be a step in the right direction towards achieving that goal.

Thank you for your attention to this matter.

Tom Hanks narrates the epic story of the 9/11 boatlift that evacuated half a million people from the stricken piers and seawalls of Lower Manhattan. Produced and directed by Eddie Rosenstein.

Eyepop Productions, Inc. www.eyepopproductions.com BOATLIFT was executive produced by Stephen Flynn and Sean Burke, and co-directed by Rick Velleu. It premiered on September 8th at the 9/11 Tenth Anniversary Summit:

Remembrance/Renewal/Resilience in Washington. The Summit kicked off a national movement to foster community and national resilience in the face of future crises. See www.road2resilience.org to become a part of the campaign to build a more resilient world. The film was made with the generous support by philanthropist Adrienne Arsht, Chairman Emerita, TotalBank (www.arsht.com)

Remember every rescuer who died in honor. Remember every American that was taken away from us and remember every family that lives in grief. But most of all, remember that Men NEVER Die Until They Are Forgotten!!!

This is “Unshaken Courage”, an original documentary by Nine Line, in remembrance of those we lost on Sept. 11th, 2001 and those still affected.

I want to thank Mr​.​ Collins and Mr. Nadler for putting this together​. But as I sit here today, I can’t help but think what an incredible metaphor this room is for the entire process that getting health care benefits for 9/11 first​ responders has come to. Behind me, a filled room of 9/11 first​ responders and in front of me, a nearly empty ​Congress.

Sick and dying, they brought themselves down here to speak to no one. Shameful. It’s an embarrassment to the country and it’s a stain on this institution. And you should be ashamed of yourselves for those that aren’t here. But you won’t be because accountability doesn’t appear to be something that occurs in this chamber.

Lou’s going to go back for his 69th chemo. The great Ray Pfeifer would come down here, his body riddled with cancer and pain, where he couldn’t walk, and the disrespect shown to him and to the other lobbyists on this bill is utterly unacceptable.

Y​ou know, I would be so angry at the latest injustice that’s been done to these men and women. Another business card thrown our way as a way of shooing us away like children trick-or-treating rather than the heroes that they are and will always be. Ray would say, “Calm down​,​ Jonny, calm down. I got all the cards I need.” And he would tap his pocket where he kept prayer cards. Three hundred forty-three firefighters.

The official FDNY response time to 9/11 was ​five seconds. ​Five seconds. That’s how long it took for FDNY, for NYPD, for Port Authority, EMS to respond to an urgent need from the public. ​Five seconds. Hundreds died in an instant.  Thousands more poured in to continue to fight for their brothers and sisters.

The breathing problems started almost immediately and they were told they weren’t sick, they were crazy. And then, as the illnesses got worse, and things became more apparent, “​W​ell​,​ okay, you’re sick​,​ but it’s not from the pile.” And then when the science became irrefutable, “​O​kay, it’s the pile, but this is a New York issue. I don’t know if we have the money.”

And I’m sorry if I sound angry and undiplomatic. But I’m angry, and you should be too, and they’re all angry as well and they have every justification to be that way. There is not a person here, there is not an empty chair on that stage that didn’t tweet out “Never Forget the heroes of 9/11. Never forget their bravery. Never forget what they did, what they gave to this country.” Well, here they are. And where are they? And it would be one thing if their callous indifference and rank hypocrisy were benign, but it’s not. Your indifference cost these men and women their most valuable commodity: time. It’s the one thing they’re running out of.

This should be flipped, this hearing should be flipped. These men and women should be up on that stage and Congress should be down here answering their questions as to why this is so damn hard and takes so damn long​,​ and why no matter what they get, something’s always pulled back and they gotta come back.

Mr. ​ ​Johnson​ (R-La.)​, you made a point earlier and it is one we’ve heard over and over again in these halls, and I couldn’t help but to answer ​i​t​,​ which was you guys are obviously heroes and 9/11 was a big deal but we have a lot of stuff here to do and we’ve got to make sure there’s money for a variety of disasters, hurricanes and tornadoes​. But this wasn’t a hurricane. And this wasn’t a tornado, and by the way, that’s your job anyway. We can’t fund these programs. You can.

Setting aside that​,​ no American in this country should face financial ruin because of a health issue. Certainly 9/11 first​ ​responders shouldn’t decide whether to live or to have a place to live. And the idea that you can give them only ​five more years of the VCF because you’re not quite sure what’s gonna happen ​five years from now​. Well, I can tell you, I’m pretty sure what’s going to happen ​five years from now. More of these men and women are going to get sick and they are going to die. And I am awfully tired of hearing that it’s a 9/11 New York issue. Al Qaeda didn’t shout “Death to Tribeca.” They attacked ​America​,​ and these men and women and their response to it is what brought our country back. It’s what gave a reeling nation a solid foundation to stand back upon. To remind us of why this country is great, of why this country is worth fighting for.

And you are ignoring them. You can end it tomorrow. Why this bill isn’t unanimous consent and a standalone issue is beyond my comprehension​, and I’ve yet to hear a reasonable explanation for why it’ll get stuck in some transportation bill or some appropriations bill and get sent over to the Senate, where a certain someone from the ​Senate will use it as a political football to get themselves maybe another new import tax on petroleum, because that’s what happened to us in 2015.